Remember the great push on the left to shut down the detention facility at Guantanamo Bay? 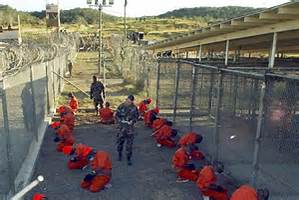 All through the Bush Administration years, the Democrats fought against the blatant lack of due process for people who were kept at this facility. Their rights had been violated by merely being detained without trial. In America, we have a Constitution and this document guarantees us a right to due process.

The counterargument was that being terrorists, the rights America offers do not apply.

This is a relevant point given where we are in the gun control debate. In the aftermath of the tragic Pulse nightclub shooting in Orlando, Florida, Democrats have renewed a push for gun control. The difference between now and past incidents is now the left has gone full blown Bush on America.

Democrats are pushing legislation that would ban suspected terrorists appearing on a government watchlist from purchasing a gun. Notice the word suspected, as these individuals have never gone before a judge to face their accuser and address accusations in a court of law. The watchlist itself is actually compiled by government agents who aren’t accountable to the American people.

The counterargument to this practice is that it violates due process and rights simply cannot be denied because someone is suspected of a crime.

Democrats now disagree with this.

The obvious point is that they’re merely politicking. They opposed President George W. Bush’s actions, not because of some philosophical differences or legal concerns, but simply because the former President was a Republican. It’s different now because it’s Democrats pushing to eliminate due process rights, so the erosion of the Constitution stops being a tyrannical act and now is a noble crusade to keep America safe.

Politicking is normal in American politics, though. The implications of the situation is far worse though.

Democrats were opposed to suspected terrorists’ rights being oppressed. But now law-abiding Americans who land themselves on a terrorist watchlist because some government agent decides they may be guilty of a crime or airport security states they share the name with someone suspicious, they are guilty of a crime.

No trial, no due process, but instant guilt that can only be reversed if the individual can prove innocence.

This not only is a shocking reversal of how the American justice system has long operated, it also smacks in the face of everything the country was founded on. Our Republic is one that is meant to favor the freedom of all Americans over a limited government. Now the government has come to rule by fear and use this emotion to destroy what this country stands for.

Democrats stand by this stance and appear determined to push it at all odds. Do Democrats really care more about the rights of suspected terrorists than that of law-abiding Americans? Does an individual caught on a foreign battlefield have more rights than an 8-year-old boy who has been mistreated by security officials all his life simply because he shares his name with someone on a watchlist?

It would appear that in the Democratic Party’s United States of America, terrorists deserve more freedom than Americans.