In this short commentary written by Dennis Prager, I agree with his overall assessment that the left influences Christianity and Judaism today much more so than vice versa. It is the left that dictates our cultural, moral, and ethical norms.

Dennis Prager does not discuss the deeper reason for this development, though I have no doubt from his other writings that he would agree that Gnosticism ultimately explains what has happened. In essence, the Western Man has divorced theology from ontology and epistemology.

In terms of ontology, this methodological and substantial divorce means that our understanding of “being-ness” must end in materialism. Man is no longer spiritual in his essence. He is physiological and psychological. The religious experience is no longer revelatory of what it means to be a man. Rather, it is merely therapeutic; a poor man’s therapist for one hour per week.

In terms of epistemology, this methodological and substantial divorce means that faith no longer has any connection to knowledge. Thus, we hear often the modern Western Man say that faith is the abandonment of knowledge, whereas the classical Christian understood that knowledge and reason are the intellectual foundations of faith. For the Christian, as a house ascends from its foundation, so does faith allow for an understanding above where knowledge and reason indeed may tread. This is possible only because God reveals Himself to us. Indeed, faith is the very act of God revealing Himself to us as much as it is an expression of our piety before Him. The modern Western Man divorces faith from knowledge in essence because he denies the historical reality of divine revelation.

So for the modern Western Man, the human person is trapped in his material self. His life is physical and psychological rather than spiritual, notwithstanding the common misuse of the word “spiritual” in our time. As a side note, the misuse is apparent when modern people say that “they are not religious, but spiritual.” The core reason that this is a misuse of “spiritual” is that, properly speaking, spirituality is our experience of divine revelation, and our fidelity to divine revelation in turn is the very definition of religion. True spirituality walks hand in hand with true religion.

As a result, for the modern Western Man, the basis by which a man can say to know anything at all, let alone to develop his moral and his ethical outlook, is decidedly this worldly. A truncated, secular philosophy replaces theology when man tries to make sense of his place in the cosmos. By extension, politics replaces religion as the means and the ends of his worship, even if out of a sense of tradition men still “worship” in churches and synagogues. Finally, our collective opinion about what something is or ought to be replaces truth as the basis for determining what are our absolutes. 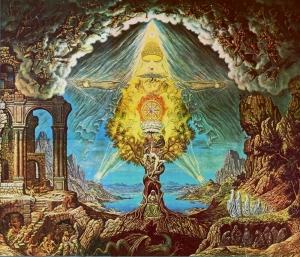 Of course, what I have been describing here is the essence of Gnosticism: Spirit divorced from Matter, thus requiring a materialist philosophical framework for ontology; Revelation divorced from Knowledge, thus holding reason and faith to be wholly incompatible; and, finally, Utopianism instead of Redemption, since Utopianism implies a perfectible state of man by man’s own measure and man’s own action in this world, whereas Redemption implies that our perfection is in that eternal life we shall enjoy with Our Father in Heaven.

The ideological left is simply a dumbed down version of Gnosticism for our times. Like Gnosticism, leftism is intrinsically materialistic philosophically (Marxism), this worldly in its epistemology (Scientism), and utopian (Nazism, Communism, and Leftist Populism). It is antithetical to classical Christianity. Its triumph in our time is a testament to the revitalization of the Gnostic Heresy that has been plaguing Western Man since well before Christianity. To the extent that leftism prevails in defining our culture, man’s self-understanding will decline from the Imago Dei in Genesis to little more than an evolved ape – an animal wholly defined by this cosmos and having no home in eternity.

Let’s discuss a rich and exotic culture, the beautiful islands of the South Seas. It is

As you’ve probably noticed, over the last week or so, there has been a furious debate

Thanks to at least nine opposing Republican senators, Congress left for its July 4 break without

Michael Sean Erickson is a political consultant, film producer, an essayist, an Anglican Catholic Priest, a stage actor, and a husband, He is also the author of The Lost Sombrero, Beautiful Catrina, and Dream Time. Originally from San Jose, California, he had lived in San Miguel de Allende, Mexico, before moving more recently to Los Angeles with his beautiful wife, Sharon, and their Shih Tzu, Shansi.

Let’s discuss a rich and exotic culture, the beautiful islands

As you’ve probably noticed, over the last week or so,