It’s a cliche in our day and age.

Whenever a grassroots movement or talking head in the Grand Old Party talks about nominating a presidential candidate to the right of the center, the same thing happens. The high-dollar consultants, State Central Committee chairs, and Capitol Hill staffers pull the ancient reference from their file cabinets, blow off the dust, and say: 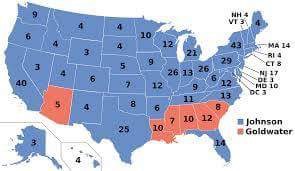 It makes sense on the surface, after all. The Party wanted to nominate New York Governor Nelson Rockefeller, go to the middle on public policy, and win the rational minds of the moderate voters by contrasting with Lyndon B. Johnson’s crass persona and corrupt insider politics.

After all, Barry Goldwater’s off-the-cuff comments had a way of finding themselves in the paper. It’s hard to be a campaign strategist and spin the media when your candidate gets caught saying he wishes someone would saw the entire eastern seaboard off and let it float into the Atlantic.

I’ve worked for candidates like that, so I can relate.

But there are a few solid differences that should give us pause comparing Barry Goldwater to Donald Trump.

First, the entire political environment of the 1964 election made it impossible for any Republican to win the presidency. The country loved Jack Kennedy, and even more than that, they loved the idealized hero version of Jack Kennedy that people remembered after he was brutally murdered. The nation wasn’t going to elect a third president in the span of less than a year, because whoever ran as Kennedy’s successor deserved Kennedy’s sympathy.

This is precisely why all-star Richard Nixon (before Watergate, obviously) didn’t run in 1964. The candidates who were left over found their strength exaggerated in the primaries because nobody who had much of anything to lose wanted to venture in. Heck, Goldwater didn’t even choose a sitting public office holder as his running mate. He chose the chairman of the Republican National Committee, giving no further explanation than “he drives Lyndon Johnson nuts.”

Second, the two candidates are just too different in too many ways to make that comparison credibly. I’ll concede a shared propensity for making comments without thinking. That much Barry and Donald shared. The two problems with this comparison are one, a vast difference of degree and two, isn’t that the same problem that plagues countless politicians? Everyone says something they regret saying, and of course some politicians are better at not getting caught than others.

But to my point, the real problem with the comparison is ideology. Barry Goldwater held a consistent ideology throughout his career. When he was first elected to the Phoenix City Council and later to the Senate from Arizona, he was a moderate. He questioned the excesses of the New Deal and appealed to a very commonly felt sense of hesitation about changing the entire form of government in the heat of a recession.

Goldwater and John F. Kennedy were good friends in the Senate, sharing their mutual distrust of their respective parties’ establishments, and looked forward to a clean, issue-centric election in 1964 in which Goldwater would challenge Kennedy for reelection.

Yeah, that’s the election we almost got to see.

But as it turned out, the Lyndon B. Johnson spin campaign pulled every dirty trick in the book, hid Johnson’s former opposition to the Civil Rights Act, and painted Goldwater as a fanatical reactionary. In the end, Goldwater carried just six states (ironically, five of them being overwhelmingly Democratic strongholds before that).

For this election, the maddening reality is that the Republican Party should, by all rules of history, sail into the White House. The stronger comparison to this year requires us to go back farther.

Take examples like Andrew Jackson or William Henry Harrison. Non-issue centric campaigns that used the personalities of the candidates to appeal to low information rural white voters. In 1840, that worked. Whether it will work in 2016 remains to be seen.

Rep. Justin Amash (L-MI) has admitted that he believes his candidacy will take more votes away

Luke is an attorney, campaign consultant, lobbyist, and historian with a passion for liberty and a nerdy sense of humor. He holds a Jurisdoctorate Degree in law and a Bachelors degree in communications.

During the reign of Queen Elizabeth I of England, the English Parliament
On April 29, 1962, President John F. Kennedy held a dinner honoring
A recent headline at Politico begins, “Don’t Blame Mental Illness for Mass Shootings; Blame
Writing for the Wall Street Journal in 2005, federal judge and former U.S. deputy
Seeing as historical racism and historical guilt/corruption of blood are apparently all
Go to Top

Rep. Justin Amash (L-MI) has admitted that he believes his