Yesterday the political world was shaken as FBI Director Jim Comey wrote a letter to Congress declaring that the investigation into Hillary Clinton’s use of a private email server was not over. In his words, “In connection with an unrelated case, the FBI has learned of emails that appear to be pertinent to the [Clinton] investigation.” We later learned that that unrelated case was none other than the investigation into disgraced former Democratic Congressman Anthony Wiener’s alleged sexting of a 15 year old girl.

While the revelation is certain to shakeup the election, it highlights yet another instance of hypocrisy in this dreadful election. Hillary Clinton is now demanding that Director Comey release the “full and complete facts” regarding the investigation. Thats right, the BleachBitter-in-Chief now wants to make sure the American people know the whole story.

It is not enough that she lied to Congress and destroyed thousands of emails to prevent them from going public, Hillary is now attacking the FBI. The same woman who stored classified documents in her basement to avoid the transparency required when using a government email is now stating that it is “imperative” that the Bureau explain the new information.

The Clinton campaign is also working overtime to impugn the character of FBI Director Jim Comey. Her campaign chairman John Podesta put out an angry letter stating that the timing was “extraordinary”. 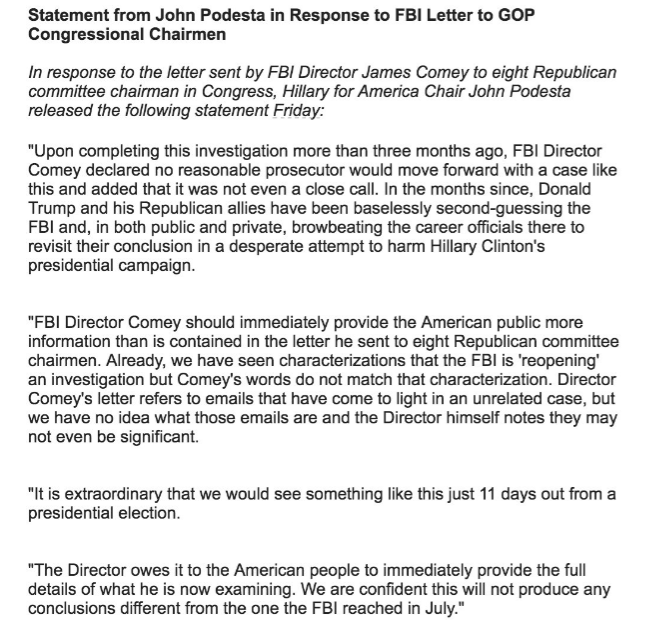 Hillary is doing the same thing that the Clinton’s have always done when faced with the consequences of their dishonesty, deflect. She did it when she had her media shills claiming that the leaked Podesta emails were more about Russia than they were about her corruption, and she is doing it again by trying to paint this investigation as a partisan maneuver.

The same hacks who, less than four months ago, were telling us how apolitical Jim Comey is are now claiming that he is involved in some conspiracy to affect the election. Democrats and the media have spent more than a week railing against Trump for his frequent claim that the election will be rigged now, but are now insinuating that the FBI Director is using his power to harm Hillary Clinton’s candidacy. This is dishonesty at its absolute worst, but it is what we have come to expect from the “I’m with Her” crowd. Everything is done and examined with the looming assumption that Trump is worse and that makes it forgivable.

Unfortunately, I doubt that this whole email investigation saga will end the way it should, but the FBI Director certainly opened the door for an indictment yesterday. Let’s hope justice is served. The law is the law. It should apply the same to a former first lady as it does to an Army private. The next 10 days will certainly be interesting.

Joshua is a graduate student majoring in Public Administration at The University of Alabama. He is the Vice President of his campus' chapters of Young Americans for Liberty and Students for Sensible Drug Policy, and he is the campus leader of UA Students for Concealed Carry. In addition to writing for The Liberty Conservative, he is an opinions columnist for the University of Alabama student newspaper, The Crimson White.