As the Republican candidates for President move to California in anticipation of the state’s primary on June 7th, front-runner Donald Trump was greeted with a pair of near riots as activists suggest larger protests will occur if Trump becomes the Republican nominee.

“I think it’s going to get worse if he gets the nomination and is the front-runner. I think it’s going to escalate,” said Luis Serrano, an organizer with California Immigration Youth Justice Alliance. “We’re going to keep showing up and standing against the actions and the hate Donald Trump is creating. We are going to continue to just show up in numbers and stand together.”

At a rally held in Costa Mesa on Thursday, anti-Trump protestors (aka Social Justice Zombies) clashed with riot police outside the amphitheater while Trump was addressing his supporters. The protestors, many waving Mexican flags, broke the windshield of a police car before attempting to flip it over, ultimately damaging a total of five police vehicles. Not content to merely attack the police, the mass of zombies saw fit to assault a Donald Trump supporter, throw rocks and other debris at passing motorists, and use benches to block the entrance of the 55 Freeway. 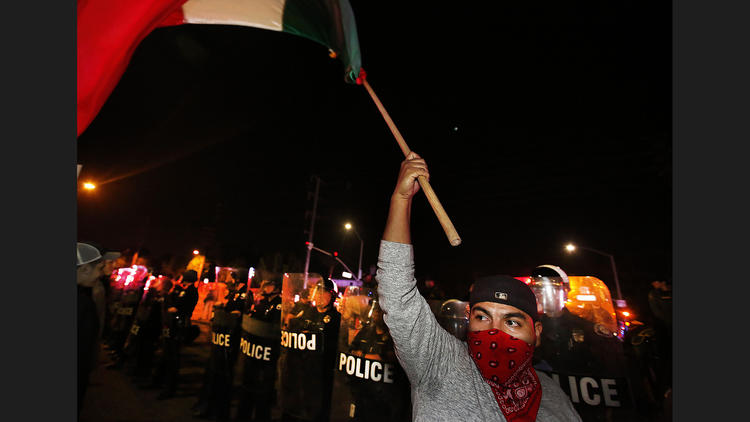 On Friday, a horde of zombified protestors, many of whom were wearing black hoods and bandanas to hide their faces, met Trump as he addressed the California Republican Party’s annual convention at the Hyatt Regency Hotel in Burlingame, just outside San Francisco. After breaking through a police barricade, protestors formed a human chain to block the hotel’s entrance, forcing Trump to jump a fence and enter through the hotel’s back door. Approximately five protestors were arrested as the crowd threw eggs and rocks at police, shouted down and assaulted Trump supporters and burned an American flag (while many stood alongside waving Mexican flags).

One Trump supporter, Adam Harry of Discovery Bay, told the Los Angeles Times he had his phone snatched from his hands and thrown across a parking lot into a bush. Protestors proceeded to spit on and shove him as he walked away, while some called him a racist.

It is incredibly ironic that those holding signs calling Trump a racist or a Nazi are, in fact, the most hateful and intolerant people themselves. Rather than counter speech they oppose with more speech, as the Founding Fathers envisioned, they seek to shut down those they disagree with or, if that does not work, assault them.

In one of the videos from the protest in Burlingame, one protestor can be heard shouting support for the establishment of Aztlan. The Plan of Aztlan, written during the First National Chicano Liberation Youth Conference in 1969 in Denver Colorado, calls for the return of California, Arizona, Nevada, New Mexico and parts of Colorado and Texas to Mexico, claiming the area corresponds to Aztlan, the mythical birthplace of the Aztecs.

Plans to conquer the Southwestern United States to form a separate country, the so-called Reconquista, are not new. In 1915, a group of Mexican rebels met in a small town in Texas to draft the Plan of San Diego, which called for killing all “Anglo” males in the Southwest and returning those states to Mexican control.

In 1917, prior to the United States’ entry into World War I, German Foreign Secretary Arthur Zimmermann sent a telegram to the Mexican government promising the return of the Southwestern United States to Mexico in return for entering the war on the side of the Axis Powers. Only after a military commission found it impossible for Mexico to both defeat the United States military and subjugate the local population did Mexican President Venustiano Carranza rule it out.

Organizations like La Raza (“The Race”) and MEChA (“Chicanx Student Movement of Aztlan”), with support from globalists like George Soros, seek to perpetuate the ongoing Balkanization of the United States by placing the blame for all of the ills in the Hispanic community, as well as in Latin American countries, on white people and Capitalism. Rather than promote a collective vision for humanity based on the Bill of Rights, private property, true free-market Capitalism and freedom of association, the globalist elite promote Balkanization and Socialism as a means to foment civil unrest, resulting in the breakdown of our society and the elimination of our collective national identity.