Before the blood even dried on the victims of another attack at the hands of terrorists, Democrats found another tragedy to exploit for political gain. The predictable response to bad people misusing a device was to blame the device itself and frame anyone with a differing political opinion as endorsing violence. The vile tactics of Democrats include mocking those who pray in times of tragedy and offer condolences to victims, purely because they don’t agree with them politically. 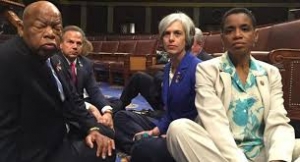 House Democrats have since been pushing legislation to strip anyone suspected of a certain crime of their constitutional rights. Their opposition to due process led to a number of grown adults charging up their cell phones, firing up their Periscope apps, and throwing a day long slumber party on the House of Representatives chamber floor.

This isn’t how America works.

The United States Constitution is actually quite clear on the fact it is the supreme law of the land, pursuant to Article VI, Clause 2. This means that the Fifth Amendment to the Constitution, which includes due process protections, is required. The Constitution itself can be changed and amended, but it hasn’t been. 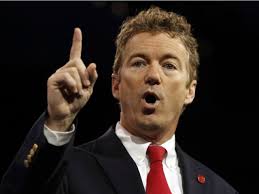 The Mayor of Lexington, Kentucky feels otherwise and launched an attack against Senator Paul over it.

Mayor Jim Gray ran an ad slamming Senator Paul for supposedly allowing terrorists to acquire guns. This is not the case. The legislation proposed would make it so anyone appearing on a government watchlist would be unable to purchase a gun, regardless of whether the justice system actually ruled them a criminal or not.

The Lexington Mayor continued his dishonesty when he claimed the legislation would not affect law-abiding Americans’ rights.

An 8-year-old boy found himself on the terrorist watchlist and repeatedly targeted by security at airports, even resulting in being patted down and humiliated in public. Martin Luther King Jr. was also on a government watchlist because government agents were convinced he was a communist and working against America. He even applied for a concealed carry permit after death threats and assassination attempts, but was then denied.

Does Mayor Gray believe that Martin Luther King Jr. was a terrorist threat? Is Mayor Gray a racist?

This is the dangerous slippery slope America will find itself on if it allows fear to overcome the law and due process to be destroyed. Innocent people can be mistaken for criminals and it happens regularly in the system. There are also those who wrongfully become targets of the system. For this reason, due process exists. When accused, those accused can face the accuser and allow an impartial arbiter to preside over the case and decide right or wrong.

If someone is indeed a terrorist, the evidence will be there and they can be tried, then imprisoned. Why does due process need to be eliminated for terrorists to be stopped?

Due process is a threat to Democrats everywhere who believe 8-year-olds can do terrible things on airplanes and that Martin Luther King Jr. was a terrorist. Mayor Gray hopes to join the fight against these despicable child terrorists and hateful civil rights activists.