While many expect former New Mexico Governor Gary Johnson, the party’s nominee in 2012, to receive the nomination again, he is facing significant resistance from many activists in the party, most prominently after his recent endorsement of former Republican Governor of Massachusetts William Weld as his running mate. 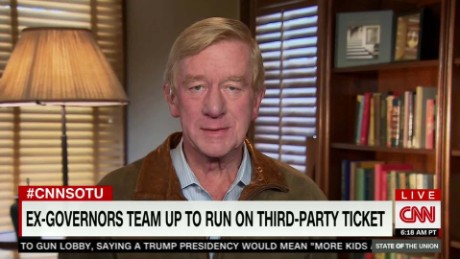 Weld has faced intense criticism for his support of gun control measures while he served as Governor of Massachusetts, including a ban on “assault weapons”, a ban on the sale of handguns to anyone under the age of 21, and the implementation of a state-level “Brady Bill” to subject gun purchasers to a five-day waiting period and background checks.

His past support for gun control, as well as questionable views on foreign policy and eminent domain, prompted Reason.com writer Jesse Walker to suggest Weld “isn’t a Softcore Libertarian – he just isn’t a Libertarian at all.”

In addition, his role as a federal anti-drug prosecutor has been met with concern from Libertarian activists. When asked by the Boston Globe about his past views on drug usage, he indicated he has experienced some “movement” towards treating drug usage as a public health issue as opposed to a criminal issue; he stopped short of supporting drug legalization, nor did he express support for legalized prostitution.

When asked a question about abolishing social security, Weld responded: “I don’t propose to abolish Social Security, I just started receiving it!’’ His continued support for the death penalty has also drawn criticism.

Among those challenging Johnson are Austin Petersen, a 35 year-old party activist who is highly popular among many in the party and has received the endorsement of Mary Matalin, a well-known political consultant who left the Republican Party earlier this year.

Also seeking to capture the nomination is cybersecurity entrepreneur John McAfee, who is hoping to capitalize on his outsider status in a year when being part of the political system is seen by many as a deal breaker.

Appearing recently on the Infowars Nightly News, McAfee assailed Johnson for selecting Weld despite his pro-gun control stance. “I have not met a single Libertarian that doesn’t believe we have a right to own and bear arms. And Gary Johnson picks a man who doesn’t want anyone under 21 having a gun, who doesn’t believe that arms are necessary unless they’re used for hunting?”

McAfee also criticized Johnson for his apparent bid to become more appealing to the establishment by selecting Weld as his Vice-Presidential nominee.

“What happens when you decide to take a slow, careful step into revolution — because libertarianism is a revolutionary idea. We want to completely change the way our government functions. When you take these slow, careful steps like Gary and the party has been doing, you end up with compromise. All change of a radical nature, in all of human history that is attempted in a slow step by step process has resulted in that movement being absorbed by the power there, through compromise. The convention has not even happened and already we have someone who is absolutely NOT a libertarian running as Vice-President.”

Writing for Newsweek, McAfee sought to remind Americans about a warning made by our nation’s 34th President. “Dwight Eisenhower warned American citizens at the end of his presidency about the implications of the military-industrial complex and its influence over government. We have now gone well beyond any of the wildest imaginations that could have entered Eisenhower’s mind.”

“The recent mini-war between the FBI and Apple over the former’s quest to unlock the iPhone linked to one of the San Bernardino shooters….should at least give a clue, to those of you those with the right kind of perceptions, where true power lies in this modern world.”