Some analysts speculated if the Fed would try to keep rates low to support the government’s spending binge. However, instead of worrying about the debt, the $400 billion spending plan and the tax cuts are being used as an excuse to raise interest rates and let the government bonds on the Fed’s balance sheet expire.

At a conference on February 27th, which was right after Powell’s first Congressional testimony, Yellen and Bernanke were asked about the biggest risk factor facing the economy. Bernanke said geopolitical events and Yellen worries about how the Fed balances growth versus inflation. While these are risks, it’s amazing to see how many of the mainstream economists ignore the debt bomb facing America. Many Fed critics predict the Fed will go through with some sort of extremely dovish policy to solve the debt problem. However, the Fed isn’t focused on this issue, so it may be behind the curve in coming up with a solution.

From an objective perspective, it appears that whenever the majority party in government increases deficits, the minority party exclaims how bad it is. Then when the parties in charge switch, the same situation arises. Politicians who aren’t in charge complain about the waste and how the government is fiscally irresponsible, but when they become in charge they don’t change anything. The Tea Party movement in 2010 was founded on stopping deficits, but now that the Republicans are in charge, deficits are exploding higher.

The chart below shows the Congressional Budget Office’s projections for spending and revenues. 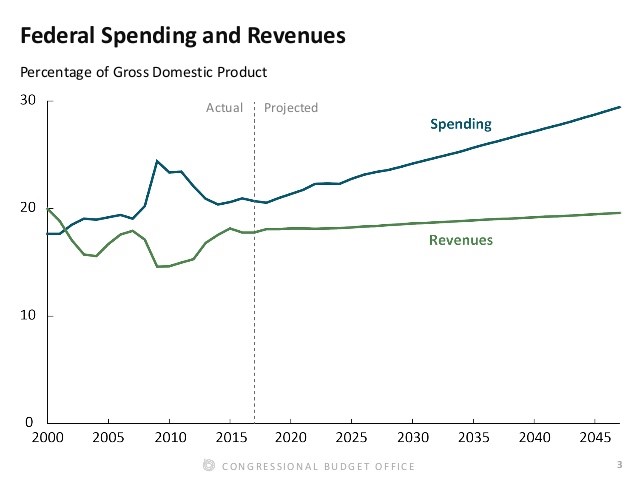 Government Spending Is Set To Explode

The debt held by the public is expected to eventually get to 150% of GDP in 2047 and break WWII-era records in less than 20 years. This estimate could be optimistic because the CBO assumes the economy will remain at full employment. However, there will likely be a few recessions in the next few decades which cause the revenues to decrease and the spending to increase, thus making the situation even more dire.

Healthcare Spending Is The Problem 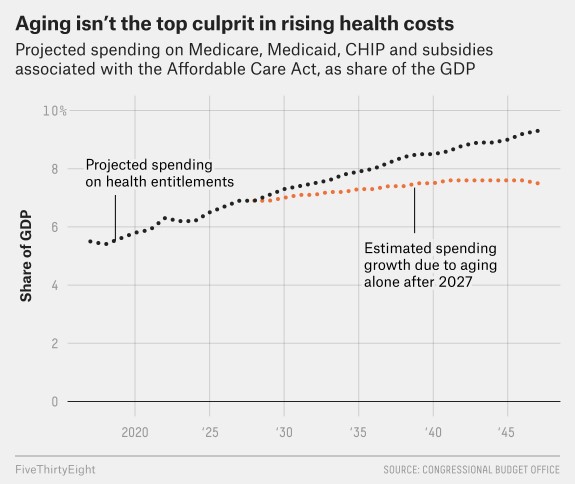 In 2017, the stock market was hungry for a tax cut and didn’t care about reforming healthcare. However, leaders need to avoid focusing on the short run and solve long run issues. The incentive structure for healthcare is completely wrong. Doctors, drug companies, medical device firms, and patients aim to try to get the insurance companies to pay the most for healthcare. It’s a losing battle for an individual or doctor to go against an insurance provider. Healthcare insurers are experts at writing policies that benefit themselves.

Instead of going with the healthcare for all narrative pushed by the socialists, the best solution is to avoid insurance for normal activity. Using healthcare insurance for a routine checkup is the equivalent of getting chemotherapy for a cold. The point of insurance is to prevent a catastrophic event from bankrupting a patient. By getting rid of insurance companies for most healthcare activities, the industry would put the focus on reducing costs instead of pitting the insurance companies against individuals. It’s possible this situation will play out on its own without the government because independent work is becoming more popular. Generally healthcare insurance is tied to employment. When this bond is broken, the marketplace will need to meet the needs of those without insurance.

Interest On The Debt Is Increasing

A normal person would be facing bankruptcy if his/her interest rates were rising as the amount he/she borrowed increased. This scenario is playing out for the US government. Treasury yields are rising just as the deficit is about to explode higher. Making matters worse is the government is sensitive to changes in rates since the average maturity date for its bonds is under 6 years. 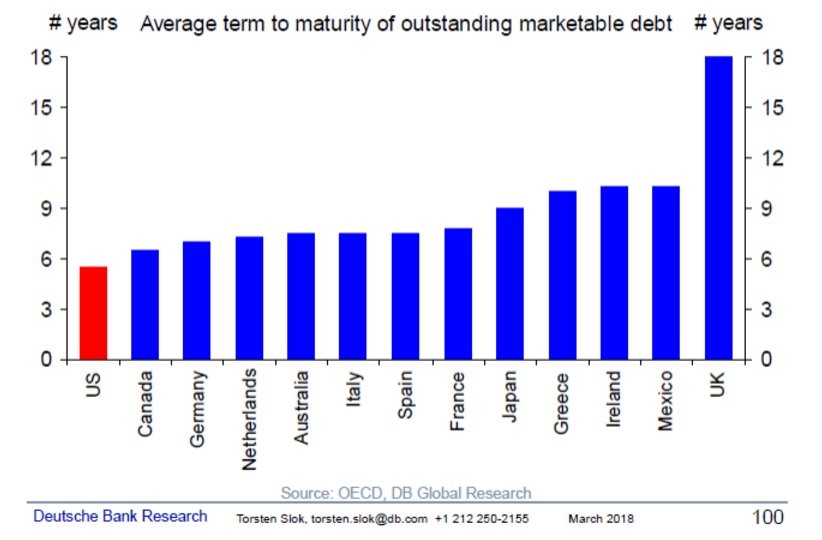 U.S. Average Maturity Date On Debt Is Below 6 Years

The US government will need to re-up all of its debt at potentially higher rates in the next few years. The government could have issued longer term debt to secure its finances, but it didn’t want to take the short term hit of higher rates.

Goldman Not Worried About The Deficits

Goldman Sachs bases its forecasts on previous scenarios. For the dollar, it looks at global growth, U.S. growth, interest rates, and monetary policy. In the past, the dollar has gone both up and down when deficits have widened, thus signifying that there is no clear correlation between the two. Using this analysis is great for situations which match the past. The chart below shows the historical performance of the dollar under Fed tightening cycles.

While a rising rate environment should increase demand for a currency, the US Dollar is viewed as a ‘risk off’ currency. It does poorly when the global economy is firing on all cylinders.

The dollar is thought of as a risk off trade; in a crisis the dollar will normally go up even if the Fed is cutting rates. This is exactly the situation which should be given more thought. Will the dollar be a flight to safety trade with the US government carrying so much debt? At what point does a recession become a dollar crisis because investors flee to other assets? These questions should be thought about instead of ignored like Bernanke, Yellen, and Goldman Sachs are doing.

This is a long term issue, so don’t necessarily expect this to be a problem in the next recession. Often Austrian economists get in trouble of linear thinking. It’s good to be one or two steps ahead of the market, however when you are three or four steps ahead, that is when you lose money, even if you are proven correct. If you predict a dollar crisis during the next recession and it doesn’t occur, all the free market solutions proposed will be ignored. The goal should be long term feasible solutions instead of being the loudest crisis predictor.

The goal is to spread the message that healthcare spending per person is the main reason deficits will explode in the next 30 years. It’s possible, this eventually causes a dollar crisis in the next few decades especially since recessions could make the current debt projections prove to be too optimistic. It’s better to propose free market healthcare solutions, than to predict doom and gloom.

We’ll leave you with the historical chart of the CBO’s deficit projections, which shows projections for the budget deficit are generally anticipated to decline or at best stabilize. The situation now is unique however, with deficits predicted to increase. If historical context is any clue, if the CBO is sounding an alarm, then it might be prudent to weigh this into your analysis. Past may not be prologue. 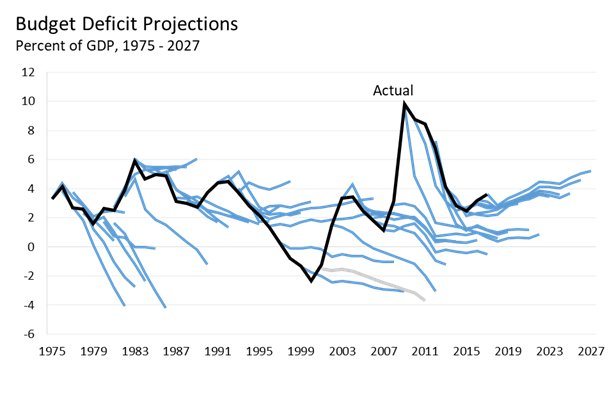